Welcome to Being Bellissima!!!

Swirl Cuff Spotted in the OC 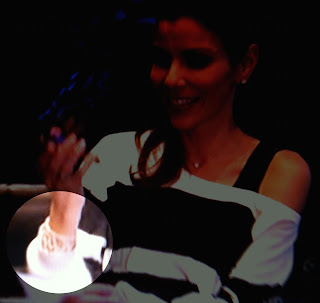 Last night, while I was pondering what Being Bellissima's next blog post should be, one of my oldest dearest friends, Lisa (a different Lisa) texted me that she thought she saw one of my bracelets on The Real Housewives of Orange County.  She even described the show down to the channel, since she knows I don't watch that kind of stuff.  So, I just got home, when she let me know that it was re-airing.  I sat down to watch  a show I have avoided since it began airing, hoping to catch a glimpse of a Bellissima cuff.  Thankfully, Lisa was right and I hadn't just wasted my time on what is a pretty crazy show, this cast member was indeed wearing our Swirl Cuff! 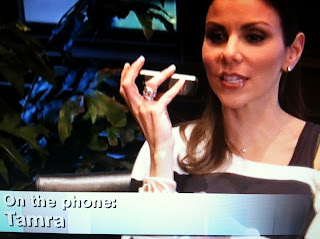 Any fan of Bellissima probably knows our swirl cuff well.  I know I still wear all of mine constantly.  We also still make it for some of our customers.  People love it.  It's fun and comfortable and really noticeable.  As you can see from this picture, Lisa was still able to recognize it as a Bellissima Cuff!
I took this picture of it, since my iphone shots aren't the best:
Thanks to Lisa!  Sorry if I sound harsh about the show, I can see how people would become infatuated with the train wrecks that appear on the show, that's just not for me!  Apparently they all don't have the worst taste in the world, like whoever this is, she obviously knows how to accessorize!
Posted by Lisamarie Commisso at 9:12 AM No comments:

It Appears We Appeared on The Today Show

This morning, while making samples for a new potential customer, I went onto the gorgeous website, Bauble Bar (if you haven't already, check it out, the site is really lovely, as is the jewelry they feature www.baublebar.com) to refer to a  pair of our earrings I was making.  Much to my surprise, a lot of our neon jewelry, very popular this season, was tagged, As Seen on the Today Show.  I had no idea, and it was a really nice surprise, although I really wish I had known!

In Fact, this is the only picture I could find!!  Kinda sad, but still very exciting!
To get a better look visit:
http://baublebar.com/index.php/fashion-jewelry/neon-jewelry/neon-nicks-fringe-earrings.html

I know we're really famous and loved for our tokyo tortoise, but I had lot's of fun putting together the neon collection.  These are some of my faves:


I know it's not for everyone, but I'm going to throw some into my personal collection, you should too!


Posted by Lisamarie Commisso at 12:28 PM No comments: